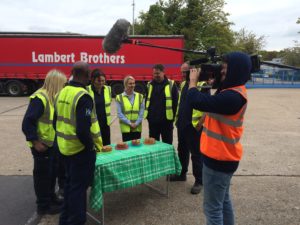 The BBC programme is hosted by MasterChef's Gregg Wallace, and award-winning greengrocer Chris Bavin who are on a mission to prove that if you shop cleverly you can save money and still create incredible meals.

Produced for the BBC by RDF Television, the filming covered a segment on the show that looked at whether food products with a higher price taste better than their cheaper competitors.

Using pork pies as a measure, the team undertook a taste test with no knowledge of which brands they were trying or the price of the pork pies to influence their decisions.

Rating their preferences, the team then unveiled their favourite pork pie, the award-winning Dickinson & Morris, in an unconventional manner - using a forklift truck.

It was a great activity for the team to be involved in and they were all excited to see the final edit when the show aired to the nation on the 7th June on BBC One.